The first EoCoE / POP workshop on benchmarking and performance analysis at Jülich Supercomputing Centre on December 8 to 11, 2015 brought together code developers of EoCoE application work packages with HPC experts associated with the EoCoE transversal basis work package and HPC experts from the CoE “POP”. The goal was to familiarise the EoCoE developers with state-of-the-art HPC performance analysis tools, enabling the teams to make a preliminary identification of bottlenecks, and to initiate the standardisation of benchmark procedures for these codes within the EoCoE project. 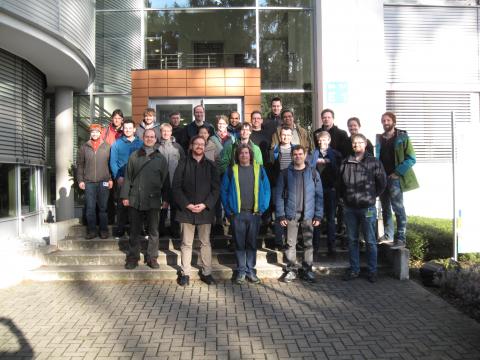 As an initial step, all code developers were instructed on how to perform benchmarking within the JUBE workflow environment, which will permit measurements to be documented, shared and rigorously reproduced over the project lifetime and beyond. Developers were then able to begin analysing their applications using specific HPC tools (Score-P, Scalasca, Vampir, Paraver, Extrae, among others) under the guidance of HPC experts. Based on this face-to-face collaboration and common training, small teams of code developers and HPC experts from the transversal basis were established, who will follow up on the promising initial work to provide comprehensive benchmarks and performance data by the time of the next workshop which will be held in March/April 2016.

A very valuable outcome was the exchange of respective ideas and needs between code developers and HPC experts, as this helped clarifying the issues from either perspective and enabled both sides to interact more smoothly with a well-defined focus on the next actions to be taken.  For example, the requirements for a full code 'audit' from the EoCoE and POP perspectives were clarified: here it was decided that the initial benchmarking would take place within and immediately after the workshop by EoCoE transversal basis members, whereas more in-depth follow-up analyses could be passed on to POP at a later stage.

[Publication in cooperation with EoCoE]